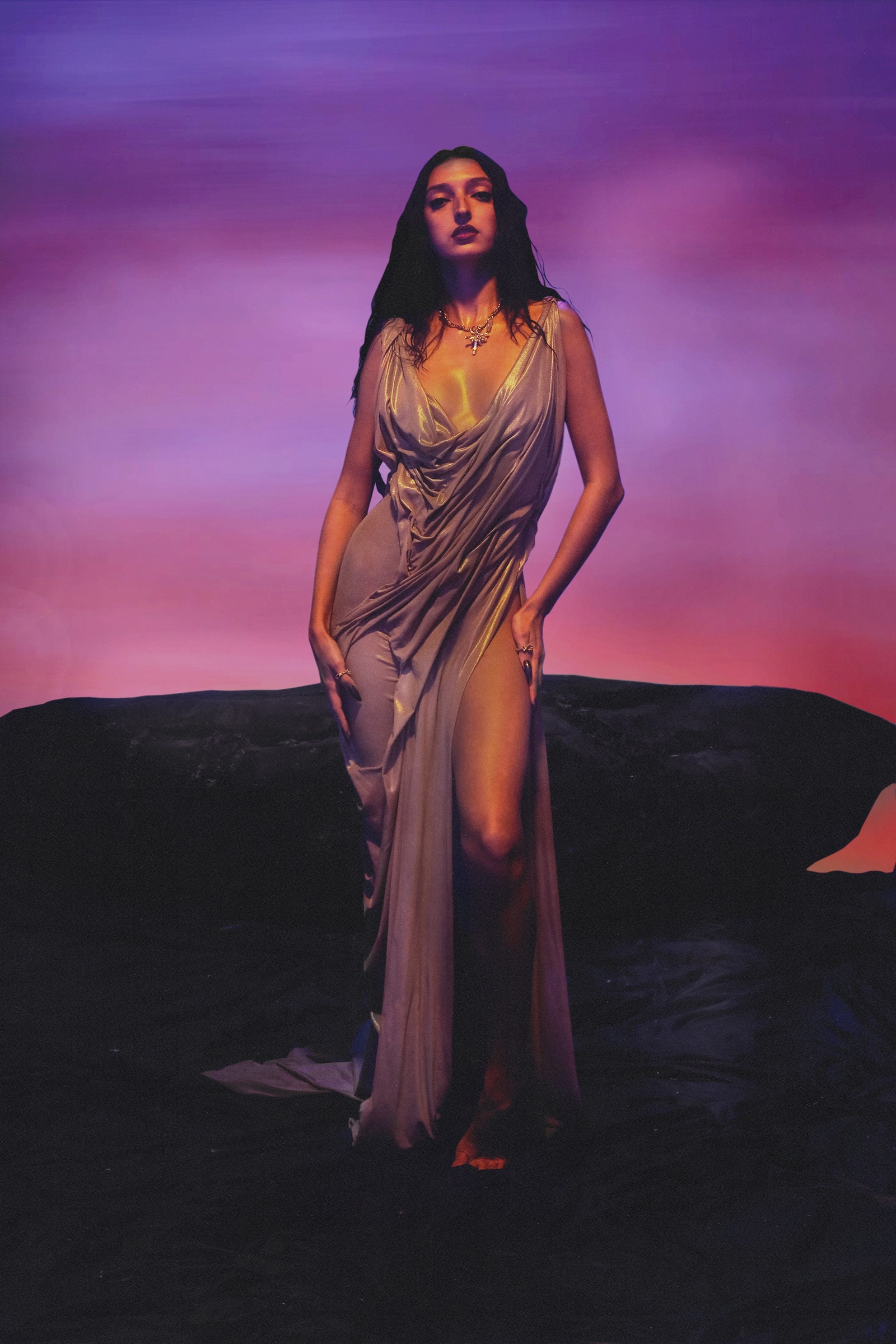 Much of mainstream fashion wants what Dimitra Petsa has—just look at the many major designers cribbing her wet-look, Greek-goddess aesthetic. But if 2020’s lockdowns and fashion’s subsequent recalibration has taught us anything, it’s that emotion can’t be faked and a new generation of fashion lovers and customers are looking for a personal connection to their clothing. That’s why women like Gigi Hadid, Yseult, and Rina Sawayama are lining up for Petsa’s custom garments.

Her ready-to-wear, presented at Paris Fashion Week for the first time as a guest of the Fédération de la Haute Couture et de la Mode, contains the same level of passion and fury as her one-off gowns. The proof isn’t only in the sensitive way she drapes her jersey to cradle the bosom, slide down the hips, or pool on the ground around the wearer’s ankles—she describes her process both as “the body emerging from something” and as a method of “accentuating the naked body, not covering it up”—but in the many women from Greece and the U.K. who went to Paris to help make Petsa’s vision real.

Zooming together at around 11 p.m. in Paris, all the lights are on in a small French apartment and women are rushing about everywhere. Long-haired friends step in and out of the frame, torsos swaying and bums held taut in knit maxiskirts, gleefully modeling Petsa’s new collection. Others hold up cell-phone flashlights to further show off the minute craftsmanship of each piece, with seams tailored to gently swoop around a body’s curves. In the background another group is sitting on the floor, working away.

“I feel like a lot of designers, with Fashion Week coming back, have this idea of ‘let’s party,’” Petsa says. “But I still think a lot of people are apprehensive about touching each other again, about seeing each other again.” She’s called her collection Nostos-Touch; the touch part is obvious, representing the idea of wanting to be embraced but being wary of its consequences. Nostos is Greek for “homecoming,” sort of like Odysseus after a long journey through the Mediterranean.

Petsa is less concerned with the trials of that mythic man and more with the Sirens he finds along the way. She tapped into this darker side of femininity, the idea of mermaids caught in nets, of constraint and dangerous freedom, with a moody palette of cobalt, navy, burgundy, and gold. Even with its complicated drapery and cutouts, this collection is her most wearable offering yet, made from cotton jersey and Tencel and adorned with custom marine blue rings, bracelets, and necklaces.

At Paris Fashion Week, the Petsa Poseidonesses came together in a performance centered around the musician Lola Lolita. Models writhed, swayed, and lay down while Lolita commanded the ceremony. Petsa says she wants to move away from Western perceptions of Greek culture. Even those with a long memory and long scholarship of ancient cultures may be hard-pressed to remember the pre-Greeks, but many of those who do have hypothesized that the earliest cultures on the Peloponnesus were matriarchal. One hopes Petsa’s customers are willing to join her on this journey through time and womanhood—but if not, these are still some of the most beautiful sexy dresses and separates this season.